The Galloping Snail in the 'First Hundred Days' 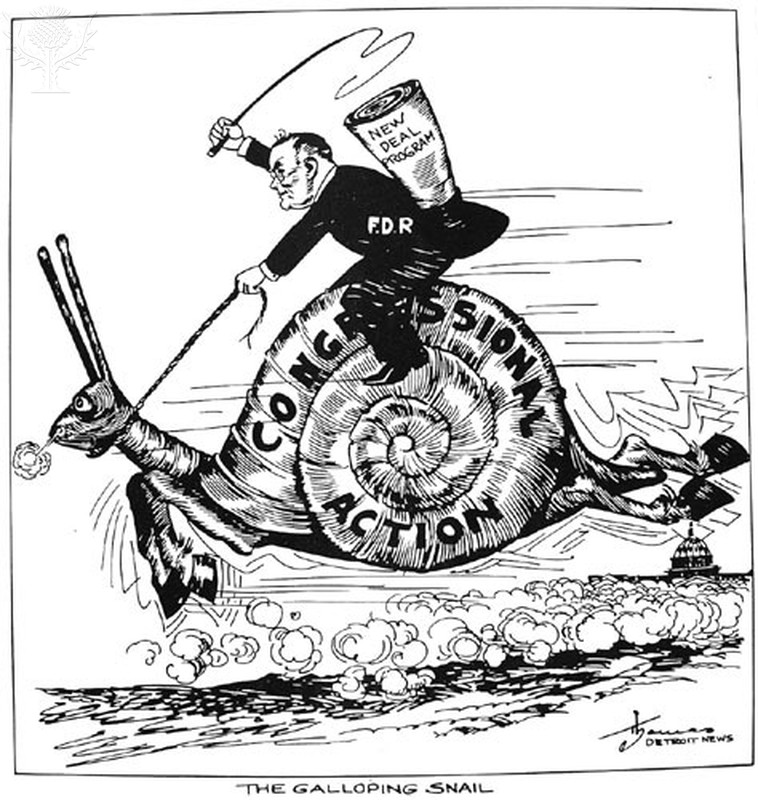 Often called the "alphabet soup" of agencies, here are ones in FDR's "First Hundred Days."

Purpose: "The Emergency Banking Relief Act allowed banks to close down and to reopen banks that were strong enough to survive. The bill also gave the Secretary of the Treasury the right to confiscate the gold of private citizens, in exchange for an equivalent amount of paper currency which was subject to later devaluation in relation to gold." It gave the president power over the banks.
www.nps.gov/hofr/upload/March%205-9.pdf</sp

Purpose: The Beer and Wine Revenue Act "amended the Volstead Act of 1919 to legalize the sale of wine and beer that contained no more the 3.2 percent alcohol."
www.nps.gov/hofr/upload/March%2020%20and%2022.pdf

Purpose: "The Economy Act reduced the salaries of federal employees by 15 percent, and forced veterans to forgo part of their war benefits. It also reorganized several government agencies in hopes of maximizing their cost efficiency."
www.nps.gov/hofr/upload/March%2020%20and%2022.pdf

Purpose: "The Reforestation Relief Act, establish[ed] jobs for 250,000 young men in the Civilian Conservation Corps (CCC). By the program’s end in 1941, 2 million people [had] worked on CCC projects."
http://www.loc.gov/teachers/classroommaterials/primarysourcesets/new-deal/

Direct aid was given to the states, which funneled funds through local agencies such as home relief bureaus, and welfare departments. The money was intended to help the people most affected by the Depression. It paid for work completed, food, and clothing."
www.nps.gov/hofr/upload/May%2012.pdf

Purpose: "The Emergency Farm Mortgage Act attempted to save the farms of individuals delinquent on their loans by extending repayment schedules and offering emergency financing."

Purpose: The Agricultural Adjustment Act was "designed to raise farm prices by cash subsidies or rental payments inexchange for reducing crop growth (cotton, wheat, corn), and dairy products such as milk and butter. It also paid them not to raise pigs or lambs."

"The money to pay the farmers for cutting back their production was raised by putting a tax on the companies that bought the farm products and processed them into food and clothing."
www.nps.gov/hofr/upload/May%2012.pdf

Purpose: FDR had asked Congress to create “a corporation clothed with the power of government but possessed of the flexibility and initiative of a private enterprise.”
http://www.tva.gov/abouttva/history.htm

Congress complied and passed the TVA Act which established an "independent public corporation authorized to construct dams and power plants to develop the economic and social well-being of the Tennessee Valley region."
http://uschscapitalhistory.uschs.org/timeline/uschs_timeline-07.htm

Purpose: "The Securities Act had two main goals: (1) to ensure more transparency in financial statements so investors can make informed decisions about investments, and (2) to establish laws against misrepresentation and fraudulent activities in the securities markets."
http://www.investopedia.com/terms/s/securitiesact1933.asp#axzz1jcSPxrbK

"Required full disclosure to investors of new securities such as stocks, bonds, and treasuries."
http://www.congresslink.org/

Purpose: The Banking Act (aka Glass-Steagall Act) established the FDIC as a temporary agency "It separated commercial banking from investment banking, establishing them as separate lines of commerce."
http://www.fdic.gov/regulations/laws/important/

President Roosevelt signed the act "to raise the confidence of the U.S. public in the banking system by alleviating the disruptions caused by bank failures and bank runs."
http://www.fdic.gov/about/learn/learning/when/1930s.html

President Roosevelt signed the National Industrial Recovery Act (NIRA) because he “sought to assist the nation's economic recovery during the Great Depression.

The passage of NIRA ushered in a unique experiment in U.S. economic history—the NIRA sanctioned, supported, and in some cases, enforced an alliance of industries.”
http://www.ourdocuments.gov/doc.php?flash=true&doc=66

Purpose: The Public Works Administration "budgeted several billion dollars to spend on the construction of public works as a means of providing employment, stabilizing purchasing power, improving public welfare, and contributing to a revival of American Industry...it was designed to spend 'big bucks on big projects.'"