Databases for the Great Depression 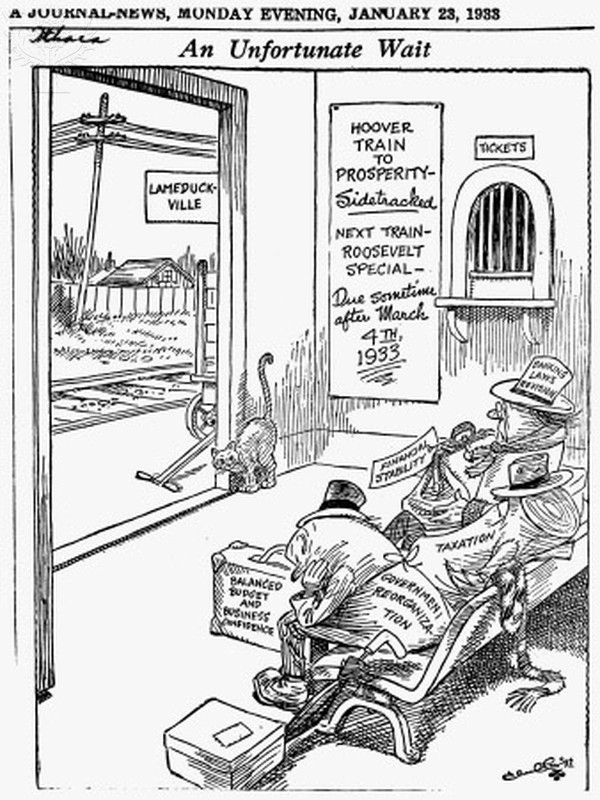 Hoover: Confidence in the Economy

Considered a humanitarian for years prior to his presidency, Hoover believed in "volunteerism" within communities and asked the private sector to come forth and help with relief for the poor and disadvantage.

Hoover said that help for the individual American should come from the local and state governments and charity organizations, not through federal legislative action.

In 1929 Congress passed Hoover’s Agricultural Marketing Act that could help farmers and give a farm board powers in the commodities market so to keep prices from falling.  It failed.

Then in 1930 in hopes of helping Americans, Congress passed the Smoot–Hawley Tariff which Hoover endorsed. Its intent was to raise tariffs on imported goods, thereby protecting farmers against foreign imports. It backfired.

Europe’s inability to trade with the United States affected the import-export business. “The tariff engulfed both continents in a circle of poverty and despair.”
A Biographical Dictionary of Presidents. Neil A. Hamilton. 2nd ed. c. 2005

Remaining ever hopeful, Hoover in Oct. 1931, encouraged major banks to form the National Credit Corporation (NCC) that would loan to other banks that were failing. It was short-lived.

That same month Hoover gave a radio address to the nation on Unemployment Relief.

By 1932 President Hoover realized that he had to change his tactics. His volunteer measures were too little too late.

By 1932 President Hoover realized that he had to change his tactics.
In February 1932, Hoover created the Reconstruction Finance Corporation (RFC) "to promote economic recovery by providing financing for banks, life insurance companies, railroads, and farm mortgage associations."
http://www.uvu.edu/ethics/other/ethicscasestudies/welfare.html
"By helping the top levels, he hoped the financing would "'trickle-down' to workers and unemployed through higher wages and new jobs."
http://www.uvu.edu/ethics/other/ethicscasestudies/welfare.html
In June 1932 Hoover signed the Revenue Act which through tax increases was to shift some of the country's burden onto the wealthy.

In 1935 President Roosevelt dedicated the dam two years ahead of schedule.