Tuberculosis, also known as TB, is a usually chronic, highly variable disease that is caused by a bacterium of the genus Mycobacterium.

It is usually transmitted by inhalation of the airborne bacteria and mainly affects the lungs but may spread to other areas, such as the kidney or spinal column, from local lesions or by way of the lymph or blood vessels.

The disease is characterized by:

Other Resources on Tuberculosis 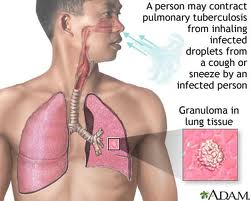