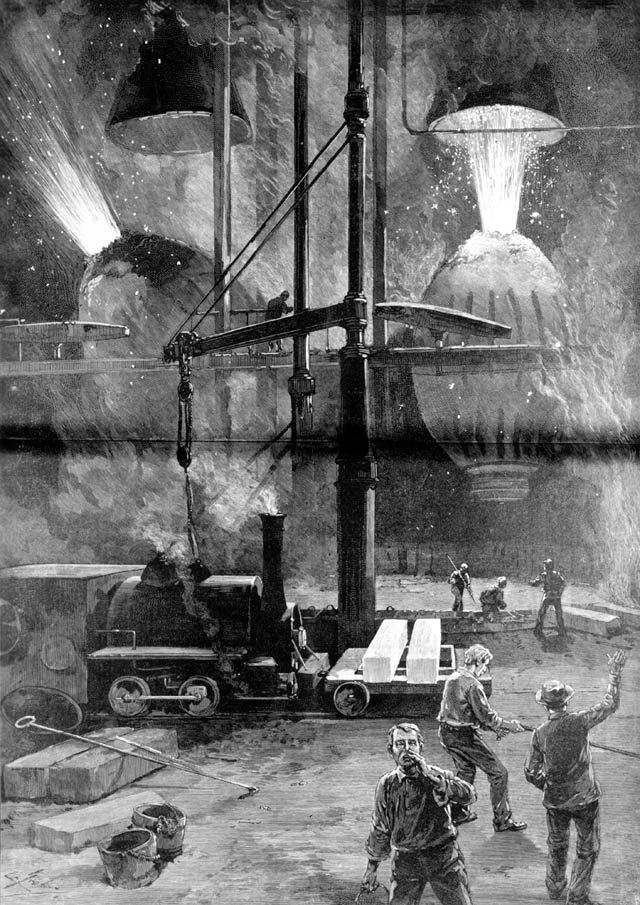 Research reveals that not all sources agree on the dates of the Industrial Revolution.  However, sources show that it clearly began in Great Britain.

1733 – John Kay (1704-64) develops the flying shuttle which weaves yarn mechanically rather than by hand., thereby allowing weavers to weave faster.

1764 – James Hargreaves (1772-78) is credited inventing the spinning jenny to improve about the spinning wheel.

1773 – A group of brokers establishes a stock exchange in London.

1776 – Adam Smith, founder of modern economics  gets his An Inquiry into the Nature and Causes of the Wealth of Nations published.

1779 – Samuel Crompton (1753-1827) invents the spinning mule which is a cross between Hargreaves’ spinning jenny and Arkwright’s water frame.

1786– Richard Arkwright uses a Watt engine in a cotton mill.

1791 - A Manchester mill orders 400 of Edmund Cartwright’s power looms, but workers burn down the mill because they fear losing their jobs.

1804 – Trevithick runs a steam locomotive on rails in an ironworks.

1806-59 - Isambard Kingdom Brunel builds many railroad lines and tunnels bridges, and steamships during his lifetime.

1811-16 – During Luddite riots, workers destroy machines they fear will replace them.

1851 – The Great Exhibition opens on May 1 in Hyde Park, London, and runs until October 11. More than 6 million people pay to visit the exhibition.

1858 – Brunel’s Great Eastern, the largest ship at that time, is launched.

1866 – The Great Eastern lays a telegraph cable across the Atlantic Ocean.

1837 – The first public railroad in France opens between Paris and Saint Germain.

1869 – Alfred Krupp introduces the open-hearth steelmaking process in his factory in Essen, Germany.

1870 - Deutsche Bank is founded in Germany as a specialized bank for foreign trade.

Industrial Revolution in the United States

1793 – Eli Whitney (1765-1825) Invents a cotton gin that separates seeds from fibers, speeding up production of the raw material.

1793 – Samuel Slater (1768-1835) Although British, Slater secretly emigrated to America in 1789 taking with him the knowledge of fellow Brit Richard Arkwright’s water-powered spinning machine. Doing so was against the British law of sharing technological information. Slater is credited for being the “father of the American factory system.”

1798 – Eli Whitney signs a contract with the U.S. government to produce 10,000 muskets in 28 months. Whitney did not invent interchangeable parts of muskets. That invention is attributed to Frenchman and gunsmith Honore Blanc.

1808-1825 – Creation of the Erie Canal. Connecting the Atlantic Ocean to the Great Lakes. The canal makes NYC become a key trading center.

1814 – Lowell and mechanic and partner Paul Moody create the first American power loom modeled after the British one.

1814 (circa) Lowell is credited for bringing in girls –“mill girls” from the farms to work in the mills, girls as young as 15 years old.

1819 – The U.S.-built Savannah is the first steamship to cross the Atlantic.

1824 - Robert Owen. Welsh industrialist purchases the town of New Harmony, Indiana, and attempts to implement his cooperative business ideas in an entire community.

1826 – Lowell, Massachusetts is incorporated as a town; it is the first planned U.S. industrial town. The town’s name reflects the textile industrialist Lowell.

1830 – The first U.S. passenger train steams along a line in South Carolina.

1831 – Cyrus McCormick (1809-84) Invented the horse-drawn mechanical grain reaper which allowed for quicker and cheaper harvesting of grain. He is considered the “father of modern agriculture.” In 1834 he applies for a patent.

1844 – Samuel Morse. He builds a test telegraph line between Baltimore and Washington, D.C. In 1844 he files a patent for the printing telegraphy and receives it in 1849.

1844 – Elias Howe (1819-67) Invented the lockstitch sewing machine. Applies for a patent in 1846. He legally fought to maintain the right to his invention; he won the suit in 1856. The sewing machine revolutionized the manufacture of clothing—from home to factory.

1855 – The first 10-story steel-girder skyscraper is built in Chicago.

1866 – Cyrus Field (1819-92) Because of his good business sense, Field is considered the father of transatlantic cable as he was able to bring the idea to fruition.

1869 – Railroad lines meet at Promontory, Utah to complete the first continuous railroad track across the country. A golden spike marks the union.

1869 – The first U.S. national workers’ organization, the Noble Order of the Knights of Labor, is founded in Philadelphia.

1881 – Samuel Gompers (1850-1924) A British-American labor leader who helped establish the Federation of Organized Trades and Labor Unions of the United States and Canada.

1881 - Jay Gould (1836-92) A corrupt railroad king and the first of the “Robber Barons.” He bought Western Union to enhance his control of communication along railroad lines.

1886 – The American Federation of Labor (AFL) is founded in Columbus, Ohio.

1887 - Nikolas Tesla (1856-1943) –Croatian-born, former Edison Works employee, Tesla files for seven patents. He is considered one of the greatest electrical engineers. By the time he died, he had more than 700 inventions.

1892 – Andrew Carnegie (1835-1919) Wealthy steel manufacturer who at that time was considered the wealthiest man in the world combines three of his firms to form the Carnegie Steel Company.

1893 – Edison develops a system for making and showing motion pictures.