Night by Elie Wiesel: The Lessons of the Holocaust

Through Elie Wiesel's memoir Night, the reader gets a sense of what it was like to be a young person caught in the maelstrom of the Nazi Holocaust and the growing darkness that resulted in a never-ending night of prejudice, devastation, and death. 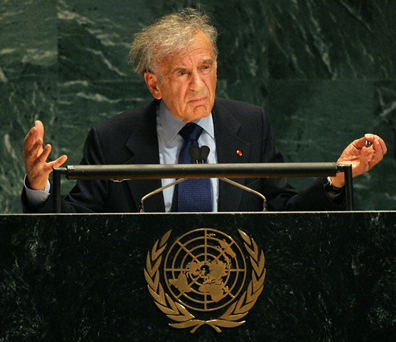 Elie Wiesel speaks at the UN General Assembly, observing the 60th anniversary of the liberation of Auschwitz.

Elie Wiesel believes that the brutality of the Holocaust can never be described in full to those who have not lived through the horror. His personal account of the Holocaust entitled Night is a vivid testimony to the terror and suffering that he witnessed and endured in the darkest period of his life.  Night and its author have become influential forces in confronting the painful period of the Holocaust.  Today, Wiesel is considered the foremost spokesperson for the survivors of the Holocaust.  As such, he is the “voice of the voiceless” and the “keeper of memory” for the millions who did not survive.

Wiesel it seems has never really left the children and his past world behind, living instead in two worlds, the world of the present and the world of memory. He remembers Hitler’s army of darkness invading his childhood and the world, devoid of light, that he struggled to survive.  However painful these memories, he believes they must be preserved for future generations.  Thus, he continues to relay his memories, so that they do not perish with him.  Perhaps his memories will save future generations from experiencing another such Night in history, another epoch of darkness that was the Holocaust.