“As he lay on his cot and listened to children playing hide-and-seek in the alleys and between the tents, he tried to forget the people who had clutched at the air as they fell into the river, some knocked down in the scramble, others shot in the back by desperate soldiers clearing a way for their own escape. He tried to forget what he’d discovered, how little other lives mattered to him when his own was at stake.” (Nguyen, The Refugees – The Other Man)

In this scene, the narrator employs flashbacks from the protagonist to highlight the traumas of the dead that the living bore. Given the cruelty of war, the powerful imagery paints a horrifying picture of humanity’s corruption in war. As seen from the brutal quarrels and relentless violence in war, at best, people could only care about themselves when their lives are at stake. The dramatic contrast between the innocence of children and the brutality of the refugee diaspora depicts the contradictory nature of war – an intangible burden carried by the refugee population.

“She used the four-burner stove in her own kitchen to conjure dishes that were, Louis said, minor masterpieces, aromatic catfish caramelized in a clay pot, tender chicken sautéed in lemongrass and chili, a deep-dish omelet of mushrooms and green onions, wok-fried morning glory studded with slivers of garlic, everything meant to be dipped in a pungent sauce that was the very lifeblood of Vietnamese cooking, a distilled essence of fish imbued with the color of dawn and flecked by red chili pepper.” (Nguyen, The Refugees – The Transplant )

Nguyen’s descriptions are very sensual. Employing figurative language and imagery in describing the dishes, the speaker paints a vivid picture with delicious dishes and courses presented to the protagonist. With metaphors like “silvers of garlic” or “the color of dawn”, the speaker uses figurative language to embellish this sensual and almost magical experience from the protagonist’s perspective. This further emphasizes the appreciation of the Vietnamese culture coming from Arthur’s perspective.

“So it was that for two minutes we sang with all our hearts, feeling only for the past and turning our gaze from the future, swimmers doing the backstroke toward the waterfall.” (Nguyen, The Sympathizer)

The usage of figurative language here represents the imminent disaster that is yet to come, for both the soldiers of the South and the protagonist himself. Under the influence of alcohol, they were ambivalent about their morals, ethics, identities, and ideals. Ignoring those, they were able to find a common ground from which they share the last moments of what has already become the past.

“Before boarding, I paused at the gates for one last look at the villa, conjured into being for the Corsican owners of a rubber plantation. An epic tamarind tree towered over the eaves, the long, knuckled pods of its sour fruit dangling like fingers of a dead man. The constant staff still stood at the proscenium atop the stairs. When I waved good-bye to them, they dutifully waved back, holding in their other hands whose white enveloped that had become, in the moonlight, tickets to nowhere.” (Nguyen, The Sympathizer)

The personification of the tamarind tree that towers over the eaves with “the long, knuckled pods of its sour fruit dangling like the fingers of dead men” symbolizes the death of the villa and its residents’ future, communicating an overwhelming sense of deadliness in the air. Using specific dictions, the writer communicates a depressing tone and creates a melancholic mood in this scene. Through using figurative language, word choices such as “conjured into being” compare the empty house to something alive, something ominous that’s almost evil. This further shows the magnitude of influence that the war has on society, where all lives are altered regardless of their social status.

“The world was muzzled, the way it would be ever afterward with my mother and father and myself, none of us uttering another sound on this matter. Their silence and my own would cut me again and again. But what pained me the most was not any of these things, nor the weight of the men on me. It was the light shining into my dark eyes as I looked to the sky and saw the smoldering tip of God’s cigarette, poised in the heavens the moment before it was pressed against my skin.” (Nguyen, The Refugees — The Black Eyed Woman)

The passage compares the sun to God’s cigarette and herself to God’s ashtray, symbolizing the death of her faith in life and God. The narrator expresses her anger and disappointment toward the inaction of the world when she was traumatized and raped at an incredibly young age, marking the death of her innocence. The trauma also killed her future, and who she might have been. In using imagery, the narrator paints a picture of her future filled with silence because of her traumatic experiences, representing the death in her faith for a better future.

“Liem could hardly blame him, for compared with Marcus, he was sorely lacking in just about every regard. Even the yellowness of his teeth was more evident next to the whiteness of Marcus’s. With body erect and head tilted back, Marcus had the posture of someone expecting an inheritance, while Liem’s sense of debt caused him to walk with eyes downcast, as if searching for pennies.” (Nguyen, The Refugees — The Other Man)

Nguyen uses several literary devices to achieve a multitude of rhetorical effects here. Most evidently, the juxtaposition between Liem and Marcus depicts the differences he saw between himself and Marcus from the perspective of the protagonist. With detailed imagery describing Marcus’s teeth and posture, the narrator is characterizing Marcus as a superior figure who is comparatively and virtually better than Liem in every aspect possible. The attentive descriptions of Marcus’s physical features also serve as a symbol that indicates the protagonist’s sexuality and foreshadows his attraction toward Marcus.

“That was my signal to follow him down our village’s lanes and pathways, through jackfruit and mango groves to the dikes and fields, dodging shattered palm trees and bomb craters. At the same time, this was a normal childhood.” “Looking back, however, I could see that we had passed our youth in a haunted country.” (Nguyen, The Refugees – The Black-Eyed Woman)

This sentence serves to provide context and set the scene for the readers to understand the historical wartime setting. The writer juxtaposes youth that’s pure and innocent in its nature to the damages and aftermath of wartime, providing a vignette into the happiness in his youth despite the haunting war. The dramatic contrast of war and his childhood anecdote reveals the cruel and vicious nature of war, further emphasizing the tragedy and damage that the writer experienced from war, as revealed in the latter part of the chapter.

“In a country where possessions counted for everything, we had no belongings except our stories.”

This short sentence perfectly captures Viet's proficient use of juxtaposition to communicate a concise yet astute central idea in a sentence. Through the comparison of two opposing ideas, the writer compared stories to materialistic possessions that are just as important to belongings like money, food, and living necessities. The employment of antithesis effectively discloses the value of storytelling and preserving memories when growing up in wartime. 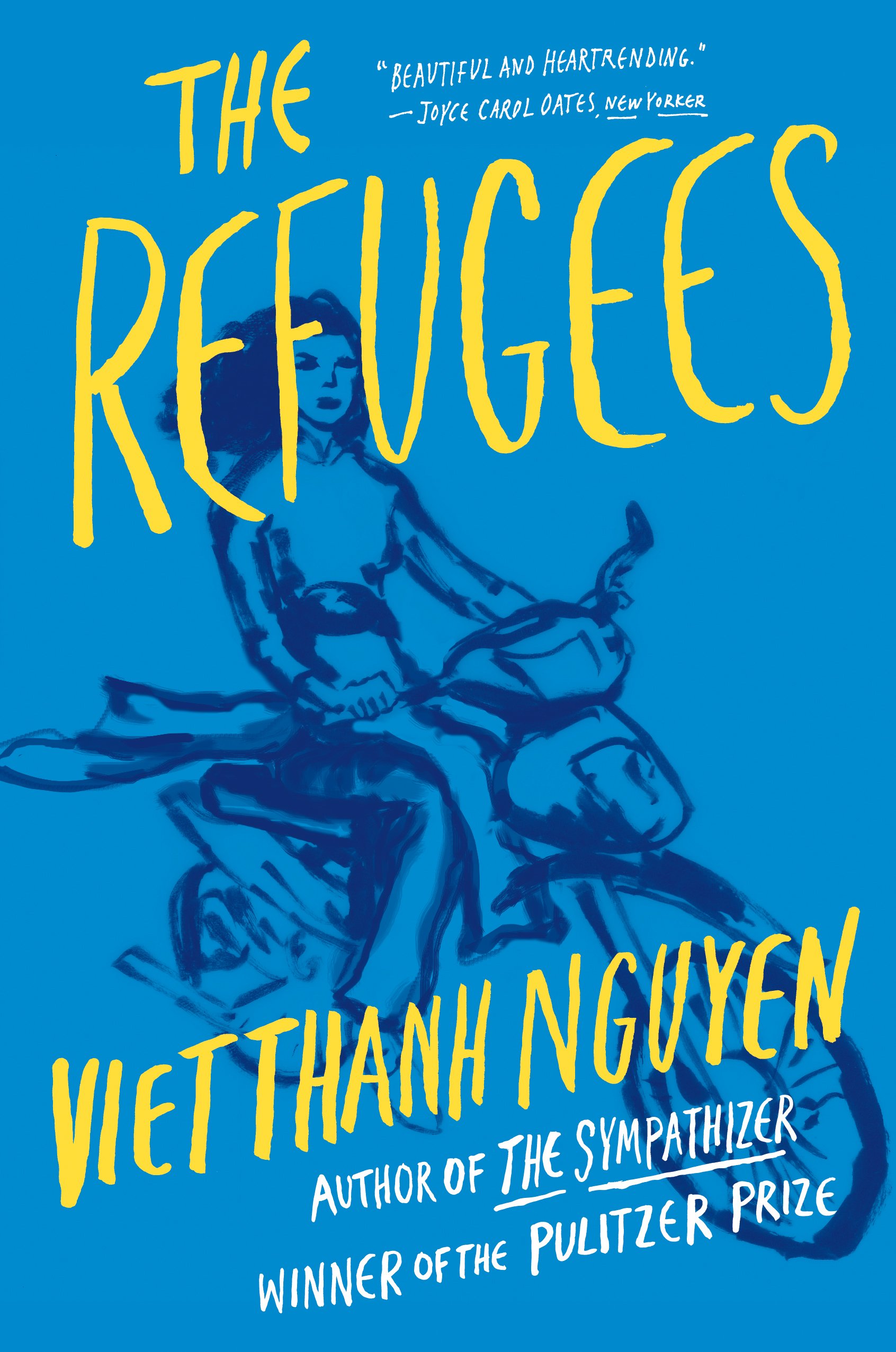 The Refugees, a 2017 short stories collection about the refugee experience by Viet Thanh Nguyen. 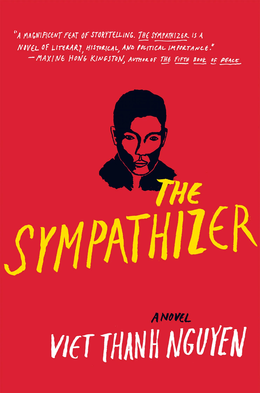 The Sympathizer is the 2015 debut novel by Viet Thanh Nguyen and was awarded the 2016 Pulitzer Award in Ficiton.