"Friend of my Youth" is a short story written by Alice Munro in 1990. The narrator retells her Mother's memories from teaching in the Ottawa Valley, whose students were two young women: Flora and Ellie of Scottish Cameronian faith. With twists and turns, peaceful relationships transform into a love quadruple between Flora, Ellie, Nurse Atkinson, and Robert that ends tragically. The style utilized in the piece is very "Munro."

"Friend of My Youth" (Introduction)

“I used to dream about my mother, and though the details in the dream varied, the surprise in it was always the same. The dream stopped, I suppose, because it was too transparent in its hopefulness, too easy in its forgiveness.

In the dream I would be the age I really was, living the life I was really living, and I would discover that my mother was still alive. (The fact is, she died when I was in my early twenties and she in her early fifties.) Sometimes I would find myself in our old kitchen where my mother would be rolling out piecrust on the table, or washing the dishes in the battered cream-colorer dishpan with the red rim. But other times I would run into her on the street, in places where I would never have expected to see her. She might be walking through a handsome hotel lobby, or lining up in an airport. She would be looking quite well — not exactly youthful, not entirely untouched by the paralyzing disease that held her in its grip for a decade or more before her death, but so much better than I remembered that I would be astonished. Oh, I just have this little terror in my arm, she would say, and a little stiffness up this side of my face. It is a nuisance but I get around.

I recovered then what in waking life I had lost — my mother’s liveliness of face and voice before her throat muscles stiffened and a woeful, impersonal mask fastened itself over her features. How could I have forgotten this, I would think in the dream — the casual humour she had, not ironic but merry, the lightness and impatience and confidence? I would say that I was sorry I hadn’t been to see her in such a long time — meaning not that I felt guilty but that I was sorry I had kept a bugbear in my mind, instead of this reality — and the strangest, kindest of all to me was her matter-of-fact reply.”

ANALYSIS BASED ON "FRIEND OF MY YOUTH"

Munro often uses syntax and literary devices to demonstrate a character's personality, giving them a distinct voice and realism.

Dialogue From "Friend of My Youth"

“They often get some kind of idea like that,” Nurse Atkinson said. “You mustn’t give in to her or she won’t let you go day or night. That’s what they’re like, they only think about themselves. Now, when I’m here alone with her, she behaves herself quite nice. I don’t have any trouble at all. But after you been in here I have trouble all over again because she sees you and she gets upset. You don’t want to make my job harder for me, do you? I mean, you brought me here to take charge, didn’t you?

“Ellie, now, Ellie dear, I must go,” said Flora, and to the nurse she said, “I understand. I do understand that you have to be in charge and I admire you, I admire you for your work. In your work you have to have so much patience and kindness.”

Dance of the Happy Shades

"Dance of the Happy Shades" is a short story by Alice Munro published in 1968. The narrator recalls attending Ms. Marsailles piano recital with her Mother. Everyone's attitude towards the recitals and Ms. Marsalles are relatively negative and restless. However, things get increasingly complicated with the arrival of a group of handicapped children. While Munro explores deep topics of social norms, she finds a style unique to the rest of her works.

"Dance of the Happy Shades" (Introduction)

“Miss Marsalles is having another party. (Out of musical integrity, or her heart’s bold yearning for festivity, she never calls it a recital) My mother is not an inventive or convincing liar, and the excuses which occur to her are obviously second-rate. The painters are coming. Friends from Ottawa. Poor Carrie is having her tonsils out. In the end all she can say is: Oh, but won’t all that be too much trouble, now? Now being weighted with several troublesome meanings; you make take your choice. Now that Miss Marsalles has moved from the brick and frame bungalow on Bank Street, where the last three parties have been rather squashed, to an even smaller place — if she has described it correctly — on Bala street. (Bala Street, where is that?) Or: now that Miss Marsalles’ older sister is in bed, following a stroke; now that Miss Marsalles herself — as my mother says, we must face these things — is simply getting too old."

Extra quote: “And above or behind all this cautious flurry of arrival there is a peculiarly concentrated silence. Something has happened, something unforeseen, something disastrous; you can feel such things behind your backs.”

ANALYSIS BASED ON "DANCE OF THE HAPPY SHADES" 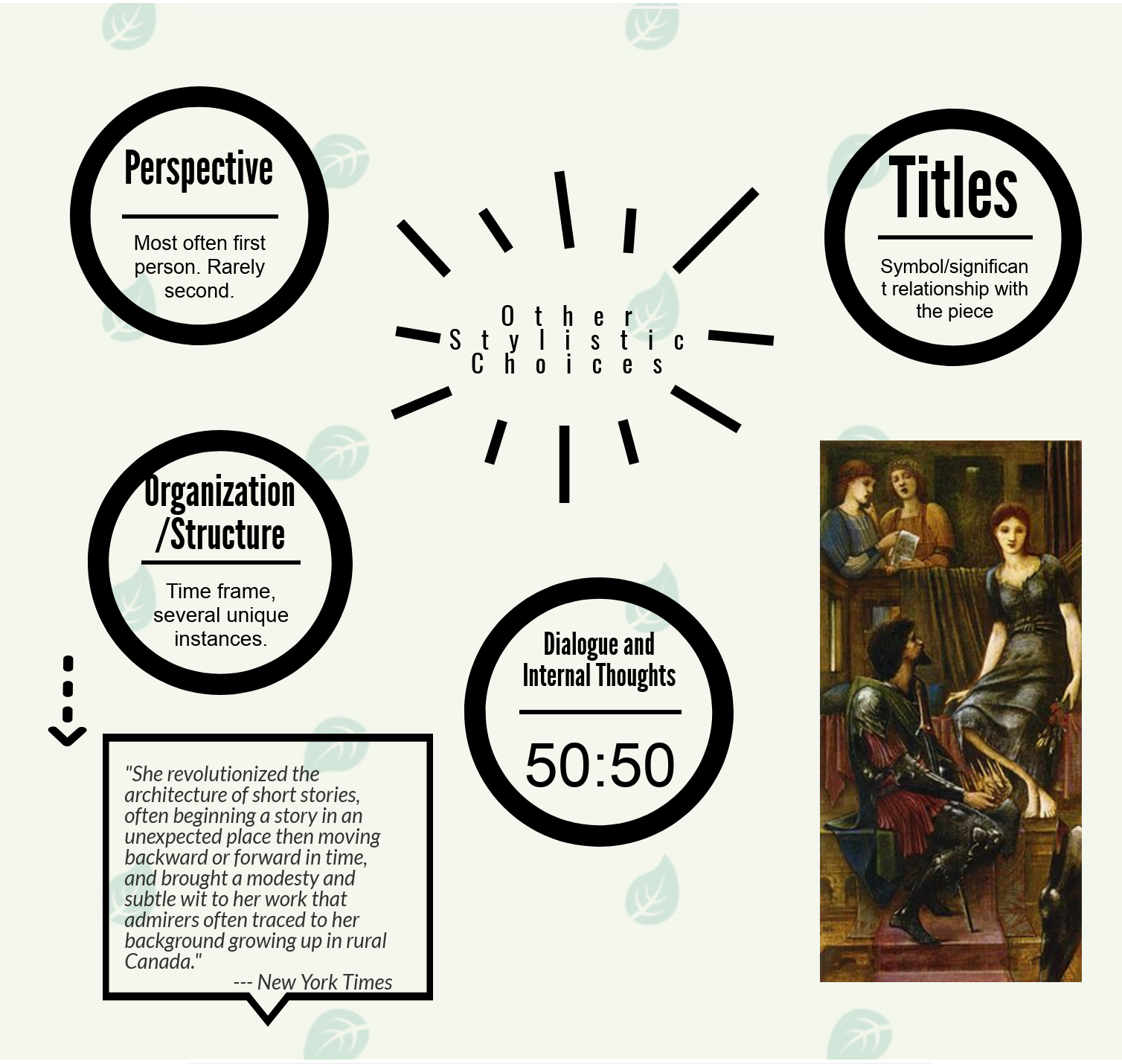