Compressed tea, called tea bricks, tea cakes or tea lumps, and tea nuggets according to the shape and size, are blocks of whole or finely ground black tea, green tea, or post-fermented tea leaves that have been packed in molds and pressed into block form. This was the most commonly produced and used form of tea in ancient China prior to the Ming Dynasty. Although tea bricks are less commonly produced in modern times, many post-fermented teas, such as pu-erh, are still commonly found in bricks, discs, and other pressed forms. Tea bricks can be made into beverages like tea or eaten as food, and were also used in the past as a form of currency.
Wikipedia, the free encyclopedia

The texture of fried taro is very unique. In modern times, it is a form of cuisine called "ba si", which is explained below.

Cooked in the style of  ba si (“bah sih”), which roughly translates to “pulling threads,” these cubes of taro had been fried until lightly crisp on the outside. They were then tossed in caramelized sugar and brought straight to the table, where wisps of candy trailed each piece as it was coaxed from the plate.
James Boo, freelance journalist, founder, editor and head writer of The Eaten Path

Snow Flower and the Secret Fan

Before Snow Flower and Lily were bonded with their laotong contract, they communicated through this fan and an intermediary. The fan was the beginning of their relationship.

[Madame Wang] reached into her sleeve, puled out a fan, and called me over. As she handed it to me, Madame Wang spoke over my head to my mother. "You need time to consider your daughter's fate."

I clicked open the fan and stared at the words that ran down one of the folds and at the garland of leaves that adorned the upper edge.....

Knowing only she could help me [understand nu shu], aunt was the first one back upstairs. Using her finger, she pointed to each character. I memorized the words on the spot: I understand there is a girl of good character and women's learning in your home. You and I are of the same year and the same day. Could we not be same together?
Lisa See, Snow Flower and the Secret Fan

Throughout the novel, they recorded their love for each other onto the fan with nu shu. Not only does the fan symbolize their complex and turbulent relationship, but it represents all of the sweet and sour that came out of the bitter lives of women in that era. Fittingly, Snow Flower's death marked the last entry on the fan, as their relationship came to a tragic end.

I went home and retired to my upstairs chamber with the fan and a few saved letters. I ground ink until it was as black as the night sky. I opened the fan, dipped my brush into the ink, and made what I thought would be my final entry....You who always knew my heart now fly above the clouds in the warmth of the sun. I hope one day we will soar together. I would have many years to consider those lines and do what I could to change all the harm I had caused to the person I loved most in the world.
Lisa See, Snow Flower and the Secret Fan

Every year since their official laotong relationship, Lily and Snow Flower would visit the Temple of Gupo, a sacred place where women come to make offerings. It is also a festive marketplace, however, characteristically marked with stalls selling good luck couplets, embroidery necessities, and of course, food. In particular, the pair always goes to the "taro man" for the "special taro dish". This dish symbolizes the innocence of young age and purity of their relationship. In essence, it represents what their relationship should have been like--what they thought their relationship would be like forever.

The following is an excerpt from the novel. It takes place when the two girls are being sent on a palanquin to the Temple of Gupo to write and sign their laotong contract. It is the first time the girls met each other.

"Do you smell it? Old Man Zuo--he owns the stand--makes the best treat in the county."..."Here's what he does: He fries cubes of taro until they are soft on the inside but firm and crisp on the outside. Then he melts sugar in a big wok over a large fire. Have you had sugar, Lily? It is the best thing in the world. He melts it until it turns brown, then he throws the fried taro into the sugar and swirls it around until it is cold. He drops this on a plate and places it on your table, along with a bowl of cold water. You can't believe how hot the taro is with that melted sugar. It would burn a hole in your mouth if you tried to eat it like that, so you pick up a piece with your chopsticks and dip it in the water. Crack, crack, crack! That's the sound it makes as the sugar goes hard. When you bite into it, you get the crunch of the sugar shell, the crispiness of the fried taro, and then the final soft center. Auntie just has to take us, don't you agree?"
Lisa See, Snow Flower and the Secret Fan

Later on, the two enter their marriages; one to the jinshi family and the other to a butcher. Despite their differences and recent distance, the two are doing everything they can--as every "proper woman" should do--to get pregnant. Their childhood innocence has been erased by the duties of a married woman, and their relationship marred by social influences. This is reflected through their reaction to "the taro dish". 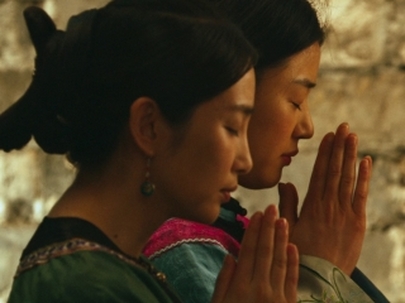 Scene from the movie adaptation of Snow Flower and the Secret Fan. The two pray at the Temple for sons.

During our second visit to the temple after becoming wives, our prayers were deeper and our offerings greater. Then, as was our custom, Snow Flower and I visited the taro man for our special chicken lunch followed by our favorite dessert. As much as we both loved that dish, neither of us ate with enjoyment. We compared notes and tried to come up with new tactics to become pregnant.
Lisa See, Snow Flower and the Secret Fan

The Tea Girl of Hummingbird Lane

The tea cake is the only connection Haley had to her origins and parents. She held it as the her most prized possession and her tea cake inspired her to direct her research project at Stanford at the health benefits of tea. It is with the tea cake that A-ma recognizes her, and it is, again, with the tea cake that she eventually reunites with her mother. The tea cake symbolizes Haley's Chinese origins, her fascination and frustration towards it, as well as her personal struggles regarding her identity.