Here's a video of people putting on the traditional Loimi Akha clothing if you're interested!

I myself am no expert on the Akha ethnic minority, of course, so as you might have noticed, I've chosen to let others, including See, to speak for me. Please excuse me of the abundant usage of quotes.

Every Akha village has their own unique spirit gate to ward off evil spirits and ghosts that haunt them in the daytime. 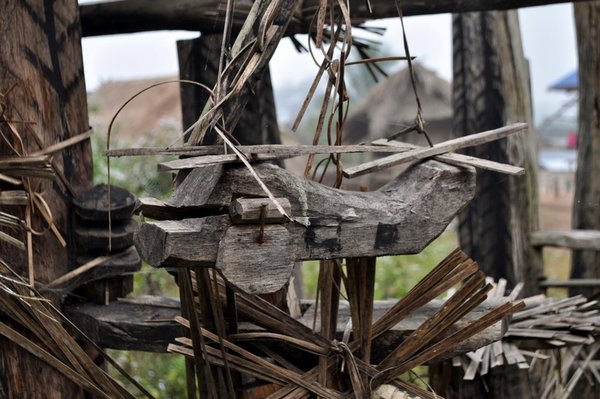 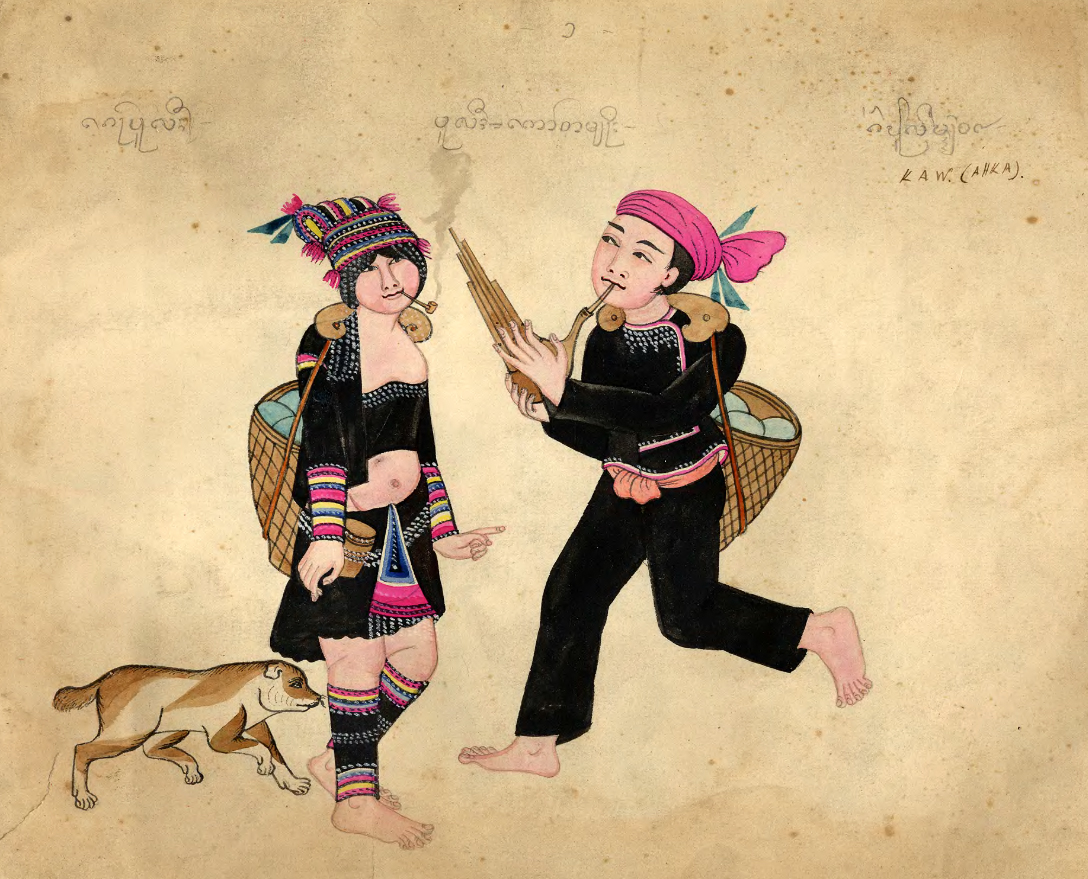 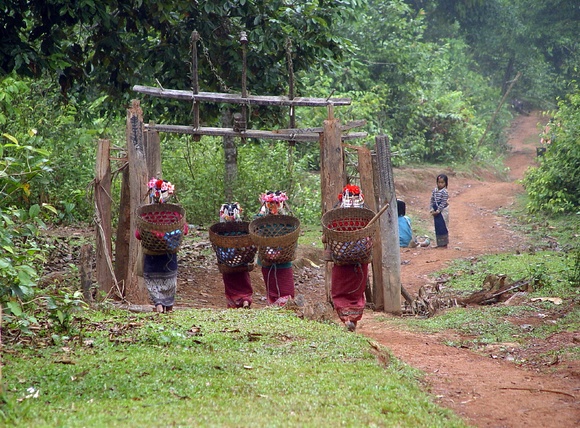 Lisa visited a tea-picking area herself in order to feel the life of a tea-picker.

FOR HISTORY AND CULTURE NERDS

Tea pickers have very unique calluses indicating their profession. Tea has been a Chinese staple for centuries. From the 茶马古道 where Chinese traded tea for Mongolian horses to the Opium Wars that began with the British obsession of tea, this beverage has had a great role in both Chinese history and culture, both locally and internationally.

People from different provinces enjoy different types of tea, and every type of tea has its "marketing health qualities" that Chinese people abide by. For example, the chrysanthemum is thought to relieve inflammation, while green tea is thought to be an effective aid against cancer. Furthermore, there is a stereotype about the people from the Shandong Province that they only drink jasmine tea, a type of inferior tea, while people who drink pu'er, on the other hand, are thought as refined.

In the early 2000s, pu'er became the item symbolizing cultural refinement, and its prices skyrocketed. It was the most popular gift given to bosses, colleagues, teachers etc. Even though its popularity has died somewhat, it still has social connotations.

THE TEA GIRL OF HUMMINGBIRD LANE

The story begins small, plunging us into the immersive detail of a single grueling day picking tea with the young girl, Li-yan, her mother, A-ma, and the rest of their ethnic minority Akha family…What makes life bearable for the Akha is their belief system, which infuses every aspect of their daily lives. The full sweep of their practices is flawlessly embedded in See’s prose…The hardships that confront Li-yan in her life are as compelling as the fog-shrouded secret groves where she and her mother cultivate a special healing tea. I could have hung out here in remote China forever, but See has wider ground to cover, including Chinese adoption, the international fine tea market and modern Chinese migration to the United States… A lush tale infused with clear-eyed compassion, this novel will inspire reflection, discussion and an overwhelming desire to drink rare Chinese tea.
Helen Simonson, The Washington Post

Unlike Snow Flower and the Secret Fan, The Tea Girl of Hummingbird Lane takes place from 1988 to 2016. The biggest infusion, then, is not history, but culture. Li-yan grows up in the Akha tribe, and that influenced everything about her life. Because she is able to eventually move up the social ladder and later enter a privileged life with the help of her husband, the stark contrast between the Akha village and modern civilization is all the more clear.

We are a people who like to roam, traveling from place to place, using the traditional practice of slashign and burning forests to create fields to plant, and then moving on when the gifts of the earth have finished being used for crops. But during the last few generations, it's become hard to claim new land on Nannuo [Mountain] or on any of the tea mountains in Xishuangbanna prefecture, so we--and other--have stayed. Permanent, A-ba says, even though the idea is against our natures. Still, our home, like all structures in Spring Well Village, was built to be temporary.
Lisa See, The Tea Girl of Hummingbird Lane

China boasts 56 different ethnic minorities and each one has its unique culture and clothing. One similarity, however, is that in many ethnic minorities, women wear a customized headdress that represents something of their social status. Unlike the more widely known Miao women who traditionally wear tall silver decorations, however, the headdresses of Akha women is characterized by colored balls or silver balls woven together "like a meadow of wildflowers".

We Akha have our own style of dress. So oo do the Dai, Lahu, Bulang, and the other tribes who live here with us. Everyone wears work clothes, but every headdress, scarf, and cap is decorated, according to the traditions of that clan and the individual taste and style of each woman or girl.
Lisa See, The Tea Girl of Hummingbird Lane
Today, the women and girls in our household are gathered around the fire pit on the women's side of the house to do needlework...First Sister-in-law and Second Sister-in-law have their heads bent together in private conversation. Puffy colored balls on the ends of wires wound with embroidery thread grow from First Sister-in-law's headdress like a meadow of wildflowers. Second Sister-in-law's headdress is fringed with a string of hollow silver balls about the size of peas that swish across her forehead like bangs
Lisa See, The Tea Girl of Hummingbird Lane
[Third Sister-in-law's] needlework is considered to be the most excellent in Spring Well. Her headdress is covered with embroidered and appliqued designs of different creatures with special meanings: a frog and a monkey at play to show harmony; a bird with a worm in its mouth to signifty her maternal love; and a butterfly whose head is embroidered to look like a lavender and yellow crab. Because she is so good at her handiwork, she can show off her expertise and creativity just for the fun of it.
Lisa See, The Tea Girl of Hummingbird Lane

Akha food often involves cooking with various types of leaves, such as bamboo, banana, and others. Here, we enjoyed a whole fish (yellow croaker, a river fish) seasoned with copious amounts of herbs and chilis and wrapped in a large leaf. The fish is grilled over charcoal before being served.
Jen, "Tiny Urban Kitchen"

We reach First Brother's tea terraces at last. I move slowly between the tightly packed rows of bushes, scanning the outer-most branches for the bud and two, maybe three, leaves that begin to unfurl as the sun's rays warm them. I gently nip the tiny cluster between my thumbnail and the side of my forefinger above the first joint. My thumbnail is stained and the little pad of flesh callused. I'm already marked as a tea picker.
Lisa See, The Tea Girl of Hummingbird Lane

The religion and beliefs of the Akha people permeate their lives. It's in how they cook, what they eat, and how they dress. It tells them what to do when they're pregnant, what signs are propitious, and whether or not one with the zodiac of a horse should marry that of a pig. For example, because Li-yan unknowingly took a bite of a pancake that was stolen by San-pa, a ritual had to be done to cleanse both children.

Second Brother returns with the ruma, who wears his ceremonial cloak--which is heavily decorated with feathers, bones, and the tails of small animals--and carries a staff made from a dried stalk of tule root. He is our intermediary between the spirit world--whether inside spirits like our ancestors or outside spiritis who bring malaria, steal the breath from newborns, or devour the hearts of beloved grandfathers--and the world of human beings in Spring Well. Tonight he's here for me.
Lisa See, The Tea Girl of Hummingbird Lane