153 anti-Chinese riots erupted throughout the American West in the 1870s and 1880s, with some of the worst episodes of violence in Denver, Los Angeles, Seattle and Tacoma, Washington.

Before Lisa See became a renowned author, she once collaborated on a series of books written by Carolyn See, their family friend John Espey, and herself. They wrote under a pen name: Monica Highland

Please describe what the pen name “Monica Highland” means to you.

Monica Highland was the pen name that my mother, Carolyn See, our friend, John Espey, and I used to write a series of books. It comes from the intersection of Santa Monica and Highland Boulevards. We had so much fun writing those books, so to me Monica Highland brings back memories of drinking champagne, family love, and laughing our heads off.

Lisa See, in an interview

Dreaming generally has high regard in the literary community, especially for the Carolyn See's personality that was displayed through the pages.

In this bittersweet and beautifully written memoir, Carolyn See embarks on nothing less than a reevaluation of the American Dream. Although it features a clan in which dysfunction was something of a family tradition, Dreaming is no victim's story. With a wry humor and not a trace of self-pity, See writes of fights and breakups and hard times, but also of celebration and optimism in the face of adversity. The story of See's family speaks for the countless people who reached for the shining American vision, found it eluded their grasp, and then tried to make what they had glitter as best they could.
University of California Press 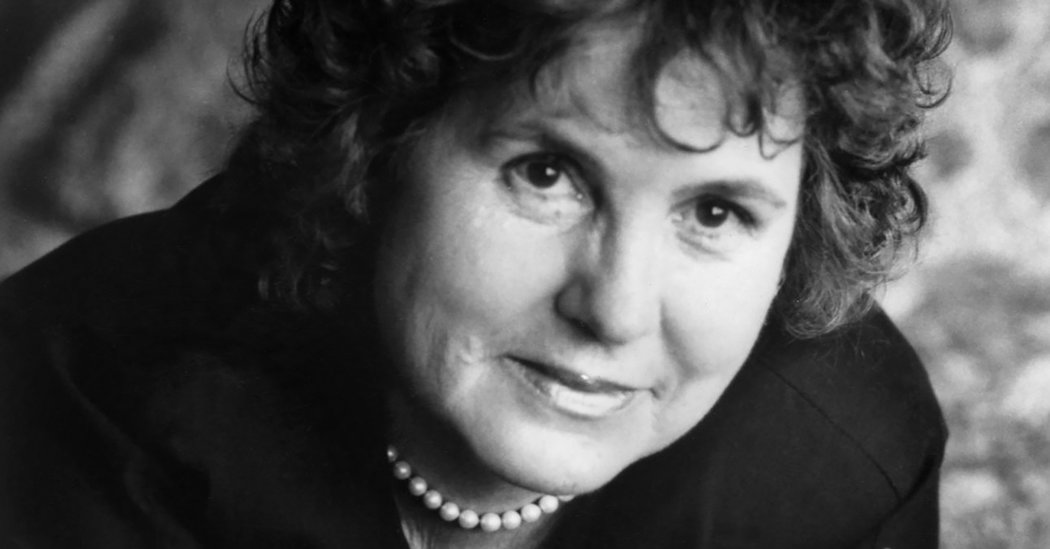 If Fong See and Ticie Pruett gave way to the content of See's works, then her mother, Carolyn See, gave her the tools with which to create.

Lisa See's mother, Carolyn See, is an esteemed author in her own right. Not only was she awarded the L.A. Times Book Prize's Kirsch Award for lifetime achievement, but she also received a Guggenheim Fellowship. As a previous professor of creative writing at UCLA, she was a regular book critic for both the L.A. Times and the Washington Post, served on the board of PEN Center USA West, and was a leading literary figure of Southern California.

"As you can see, I adored my paternal grandmother. She probably was the greatest influence on my life. She loved to travel. She wasn’t very conventional. (She married a Chinese man when it was still against the law.) My mom, Carolyn See, who is a writer, has also been a huge influence on my life as a woman and a writer. I can honestly say I wouldn’t be the writer I am if not for her."
Lisa See, in an interview

However, Carolyn See's dysfunctional family eventually permeated both her works and her daughter's. 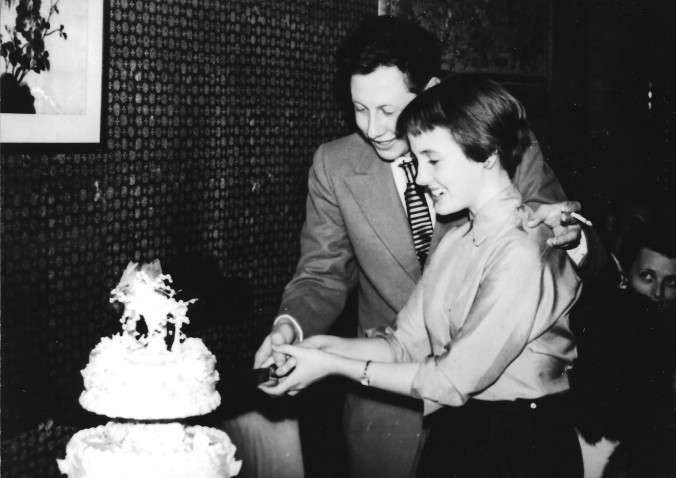 The wedding of Richard See and Carolyn Laws, 1954

"So in her [Carolyn's] memoir, subtitled "Hard Luck and Good Times in America," she rages through her family's episodes of drunkenness, abuse and bitterness, picking apart an American Dream meant to hold a family together, but which drove hers apart. Her memoir includes accounts of her grandmother's bathroom suicide, her mother's abuse of her half-sister and her own drinking, drug use and failed marriages."
Mary B. W. Tabor, writer for the "New York Times"

In the Introduction of Dreaming (Hard Luck and Good Times in America), Carolyn See goes through "the pigskin chest that holds about seventy-five years of family photographs" with her daughter, Clara, for this book. She recounts telling family stories to each other--again.

"I open up a bottle and we tell each other, as rapidly as possible, the story of Uncle Bob, so drunk (but who wouldn't be with that bat for a wife?), unfurling his napkin through a candle flame on Thanksgiving and setting himself on fire. Or Uncle Bob sitting next to Clara's dad on another terrible holiday, when something like Godzilla Meets the Undersea Monster was playing on TV and as Godzilla crushed an aircraft carrier, Uncle Bob earnestly said to Tom, "I guess this reminds you of the old days?" Because Tom served on a carrier. And Tom had to laugh."
Carolyn See, Excerpt from Dreaming (Hard Luck and Good Times in America), pg. xv-xvi 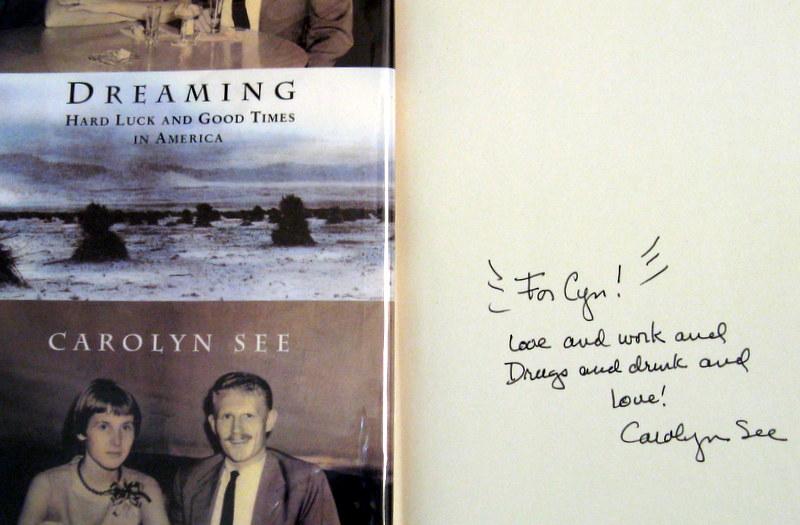 Much of Carolyn See's childhood was spent trying to "hold her family together". Having endured an alcoholic father, See divorced Richard for his gradual descent into alcoholism. As a child, Lisa See watched as her parent's got divorced and her mother began indulging in drugs. When her mother was high, See took care of her younger sister, Clara, brought coffee to guests that passed out on her living room floor. When her stepfather left, she sewed a jacket for her mother in attempts to console her.

The discrepancies between subject matter (encompassed in the differences between Dreaming and On Gold Mountain) can be generalized to one factor. Because of the chaotic and often oppressive environment at home, Lisa See was turned to the F. Suie One company owned by her paternal grandparents, which quickly became her childhood refuge. 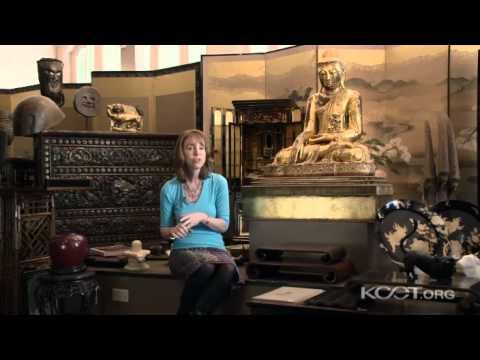 Photo of Lisa See in an interview at the F. Suie One

"Things were so fractured and wild at home," Lisa said in a recent telephone interview from her summer home in Colorado. Her parents were loving, she said. "But the weekends with my grandparents became the real center for me," she added. "It was the side of the family I identified more with. It was fun, romantic, solid."
Mary B. W. Tabor, writer for the New York Times

It was here that Lisa See fell in love with Chinese culture. At the F. Suie One, her Chinese grandparents, great-aunts, and great-uncles told her stories about Fong See--the "patriarch of Los Angeles Chinatown"--that lived to be 100. "I loved those stories," See says, "and so did many other people, who often approached my family to write a book, a magazine article, or even a film script about my family."

This became the factor that differentiated Lisa See from her mother--while Carolyn See wrote about her natal family and the shattering of the American Dream, Lisa See documented her family's saga in On Gold Mountain to preserve the permanent stamp her childhood had received at the F. Suie One.

However, because a large source of Lisa See's childhood memories came from the F. Suie One, Lisa See grew up looking American, but believing herself to be Chinese. This, coupled with her Chinese roots from Fong See, created the most significant core of Lisa See: her biracial, bicultural identity.

...my Chinese background influences everything in my life. It’s in how I raise my children, in what I eat, in how I remember the people in my family who’ve died. It’s in what I plant in my garden and how I decorate my house...But because of how I look I will always be “outside.” When I go into the larger white community here in the U.S., people look at me and talk to me as though I belong, but inside I often feel very foreign. I don’t like their bigotry and racism.
Lisa See, "On Gold Mountain"

It is without doubt that See brings this integral part of her identity into her literature. China has been the initial setting in every single one of her novels, and America has been a regular destination. For example, Shanghai Girls follows the heart-wrenching journey of Pearl and May who escape the Sino-Japanese War by illegally immigrating to America. The Tea Girl of Hummingbird Lane documents a girl born from the Akha minority who eventually works her way to the West in search of her daughter. Dreams of Joy struggles with Joy's escape to China and her eventual return to the United States.

"I guess what I’m trying to say is that in many ways I straddle two cultures. I try to bring what I know from both cultures into my work. The American side of me tries to open a window into China and things Chinese for non-Chinese, while the Chinese side of me makes sure that what I’m writing is true to the Chinese culture without making it seem too 'exotic' or 'foreign.'"
Lisa See, "On Gold Mountain"

Although See does not understand Mandarin, all of her novels to date have been based in China. From Snow Flower and the Secret Fan that deals with foot-binding during parts of the Taiping Rebellion to Dreams of Joy that deals with the Great Leap Forward in the 1950s, See has researched and penned China old and new into her pages. Combining her Chinese roots and her Western education, See has provided an opening for North Americans to begin understanding China and its culture. None of this could have been possible without, sadly, the dysfunction of her family, and the roots of Fong See.