Tell us about your literary journey. How easy (or difficult) was it to get your first book in print?

Like I said, I’d already been working a long time as a professional writer, so people in publishing knew me and my work. (They may not have known me personally, but they read me almost every week and knew, among other things, that I could meet a deadline.) I also benefited from the success of Amy Tan’s The Joy Luck Club. Publishers were actively looking for more Chinese-American stories. Amy’s agent was Sandy Dijkstra. Sandy has a great American art collection, and she helped me with some of the art sources for On Gold Mountain. After two years of work—doing interviews, traveling back to the home village, searching out what I could find in archives, and then writing the proposal—I thought that Sandy would be the perfect person to sell the idea. There was an auction—a miracle as far as I was concerned. So, hard work, timing, and good luck.

Lisa See, in an interview

See's targeted audience is the general masses of the Western world. Her books were not intended to be read by the native Chinese, due to language disparities. Nevertheless, the accuracy and depth of her research (cultural and historical) is indisputable; if Western readers treated her novels as textbooks, they would not be deceived.

Evidently, the audience concurs as none the ratings for See's novels on Goodreads are below 3 stars.

The most praises See receives are on the subjects of providing historical/cultural context, creating thoughtful themes, and her rhetoric. 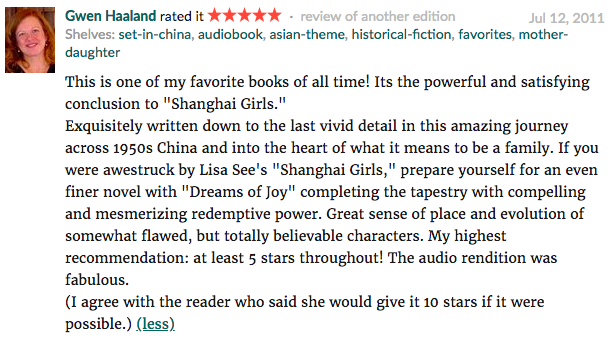 Personally, I am continuously awestruck by the amount of research See put into her books. In Shanghai Girls, a book that opens up in the midst of busy, 1930s Shanghai, the detail is specific to the street names. While reading, I kept thinking to myself, "this author knows more about Shanghai's past than I do--and I've lived in Shanghai for 13 years!"

We cross a bridge over Soochow Creek and then turn right, away from the Whangpoo River and its dank odors of oil, seaweed, coal, and sewage. I love Shanghai. It isn’t like other places in China. Instead of swallowtail roofs and glazed tiles, we have mo t’ien talou—magical big buildings—that reach into the sky. Instead of moon gates, spirit screens, intricate latticework windows, and red lacquer pillars, we have neoclassical edifices in granite decorated with art deco ironwork, geometric designs, and etched glass. Instead of bamboo groves gracing streams or willows draping their tendrils into ponds, we have European villas with clean façades, elegant balconies, rows of cypress, and cleanly cut lawns lined with immaculate flower beds. The Old Chinese City still has temples and gardens, but the rest of Shanghai kneels before the gods of trade, wealth, industry, and sin. The city has godowns where goods are loaded and unloaded, courses for greyhound and horse racing, countless movie palaces, and clubs for dancing, drinking, and having sex.
Lisa See, Shanghai Girls

The critical reception given to Lisa See is generally positive. Both Shanghai Girls and Snow Flower and the Secret Fan received honorable mentions from the Asian/Pacific American Awards for Literature. Lisa See was awarded National Woman of the Year in 2001 by the Organization of Chinese American Women. She further received the 2003 History Makers Award that was presented by the Chinese American Museum.

Again, the praises can be generally categorized into how she provides extensive context...

...how she dives into profound themes...

"See’s work is a subtle form of feminist manifesto: the presentation, without comment, of indignities suffered by women as a way of highlighting the strides women have made over the years."
Michael Magras,  Los Angeles Review of Books

...and how she writes stylistically.

"The immediacy of her prose and her gift for building tension are two of the biggest reasons for her popularity, as is her ability to beguile with the unfamiliar."
Michael Magras, Los Angeles Review of Books

All of this shows the immense influence of See's works on the perception of China in the United States, as well as other western countries.

However, because of the extensive research See conducts for each and every novel, she tends to incorporate an enormous amount of copious detail about culture and history into the novels. A large amount of readers feel "bogged down" by the overwhelming--and sometimes even boring--amount of information.

Snow Flower and the Secret Fan 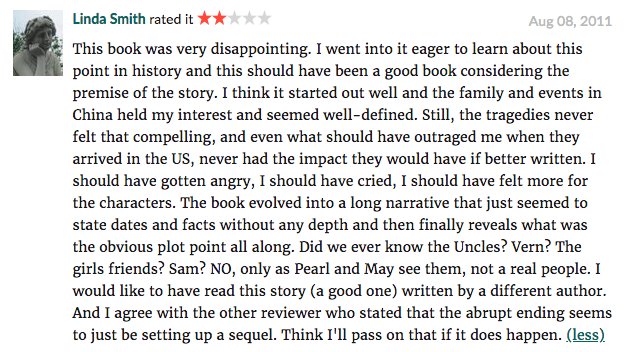 Having read several of See's books myself, I do agree that the historical development seems more compelling than the characters themselves. They are often passive to their circumstances, with the same descriptive adjectives throughout the book. For example, See brings in the Chinese zodiacs in Shanghai Girls and Dreams of Joy. Pearl is a "dragon", Joy is a "tiger", etc. It eventually seems somewhat stuck on the surface, and I would have liked to see more layers to the characters.

She [Ma] believes in astrology, blaming or praising May and me for one thing or another because we were born in the Year of the Sheep and the Year of the Dragon, respectively.
Lisa See, Shanghai Girls

The episodic and creaky plot staggers under the weight of See’s considerable research into the careers and lifestyles of the actual stars of the all-Asian revue craze of the 1930s and ‘40s.

Pearl's reaction to her fate sets the stilted narrative tone that makes "Shanghai Girls" less absorbing than its predecessors. "I thought I was modern. I thought I had choice. I thought I was nothing like my mother," she anguishes. "I'm to be sold -- traded like so many girls before me -- to help my family. I feel so trapped and helpless that I can hardly breathe.”

Nimura reviews for the Los Angeles Times and the Chicago Tribune

See's emotional themes are powerful but familiar -- the bonds of sisterhood, the psychological journey of becoming an American -- and when she pauses for character development, clichés creep in.

Nimura reviews for the Los Angeles Times and the Chicago Tribune

Thus, it can be seen that the most respectable aspects of See's novels are the inspiring historical settings and research. In the end, whether one enjoys the characters or not, her books have become an important bridge between Chinese history and American literature. For that, we must thank her.