Phi Fic #1 "In the Penal Colony" by Franz Kafka

The first "official" episode of the new Phi Fic podcast! (What used to be the Not School Philosophical Fiction group, now gone public.) We talk about the short story In the Penal Colony...

Podcast on "In the Penal Colony"

When one considers Kafka's cultural context, as well as his strenuous relationship with his father, the theme of the inevitability of isolation presents itself quite strongly through a number of Kafka's works. This alienation can take the form of both physical and ideological separation, and is most prevalent in the pieces A Hunger Artist and The Metamorphosis.

Many of Kafka's pieces also explore the philosophical phenomenon of existentialism. Though this ideology is hard to definitively describe, most of its inner workings are centered around questioning the existence of man; who we are, what our purpose is, and whether or not there is a god. A concept often affiliated with existentialism is the idea of absurdism. This philosophical concept states that, ultimately, man's existence is futile, and we are all subject to a hopeless fate regardless of the choices we make. Unfortunately, many of the characters in Kafka's pieces seem to be trapped in this meaningless, cynical realm, their demise essentially meaningless in the grand scheme of their previous existence.

Kafka's absolute disdain for bureaucracy is most commonly found in his novels The Trial and The Castle, although many have interpreted In the Penal Colony to be a criticism of the bureaucratic system as well. In The Trial, the protagonist Joseph K. is told he has committed a crime without the crime ever being made known to him or the audience. The novel chronicles his perplexing journey through the impersonal judicial process, and eventually culminates in his suicide. Living in the Austro-Hungarian empire, which utilized a bureaucratic system, Kafka demonstrates through his works that he was extremely discontent with this system. The faceless, mechanical functionality of a bureaucracy seems to promote the idea of a purposeless existence, and thus harkens to the ideas of absurdism. Perhaps the bureaucratic machine contributes to the idea that life is only about going through the motions with no true meaning, precipitating both Joseph K.'s demise and Kafka's disdain for this system of government.

"A Hunger Artist" is a short story by Kafka published in 1922. The story follows an unnamed "hunger artist" who starves himself in a cage as his form of art. He seeks the adoration and attention of the public around him, yet with the passage of time, his public becomes increasingly disillusioned by his self-starvation and begin to disregard him. At the end of the piece, he is found starved to death in his cage, forgotten by the world around him.

The hunger artist imposes hunger upon himself throughout the duration of the story. By the middle of the piece, even the premise of food made him sick, revealing his complete embrace of starvation. This is counter to a typical reaction of someone who is starving. When the hunger artist is on his death bed, an overseer asks him why he could not stop fasting. The hunger artist responds by saying that he "couldn't find food liked." On a literal level, this demonstrates that the hunger artist was fasting as a form of art; however, we now know that he did not seek normal food, as he has previously stated that "fasting was the easiest thing in the world." Thus, with his rejection of physical food, we can deduce that the "food" he craved was actually the validation of others. Unfortunately, he never received it, which precipitated his death.

The hunger artist's cage is continuously mentioned throughout the piece. The artist demonstrates an affinity for his cage that is contradictory to the nature of man. Despite his ability to be free, he actually prefers the cage over the societies that he presents himself to. As he becomes increasingly obsolete, his attachment to the cage actually becomes increasingly animalistic; he even joins the ranks of circus animals of his own volition. Therefore, the cage serves as a physical manifestation of the dichotomy between the artist and his society. Despite being ostracized as he is contained in his cage, he does not want to leave it and is separated significantly as a result. The artist eventually dies in this "perfectly good cage," signifying that the rift between artists and observers will live on indefinitely. 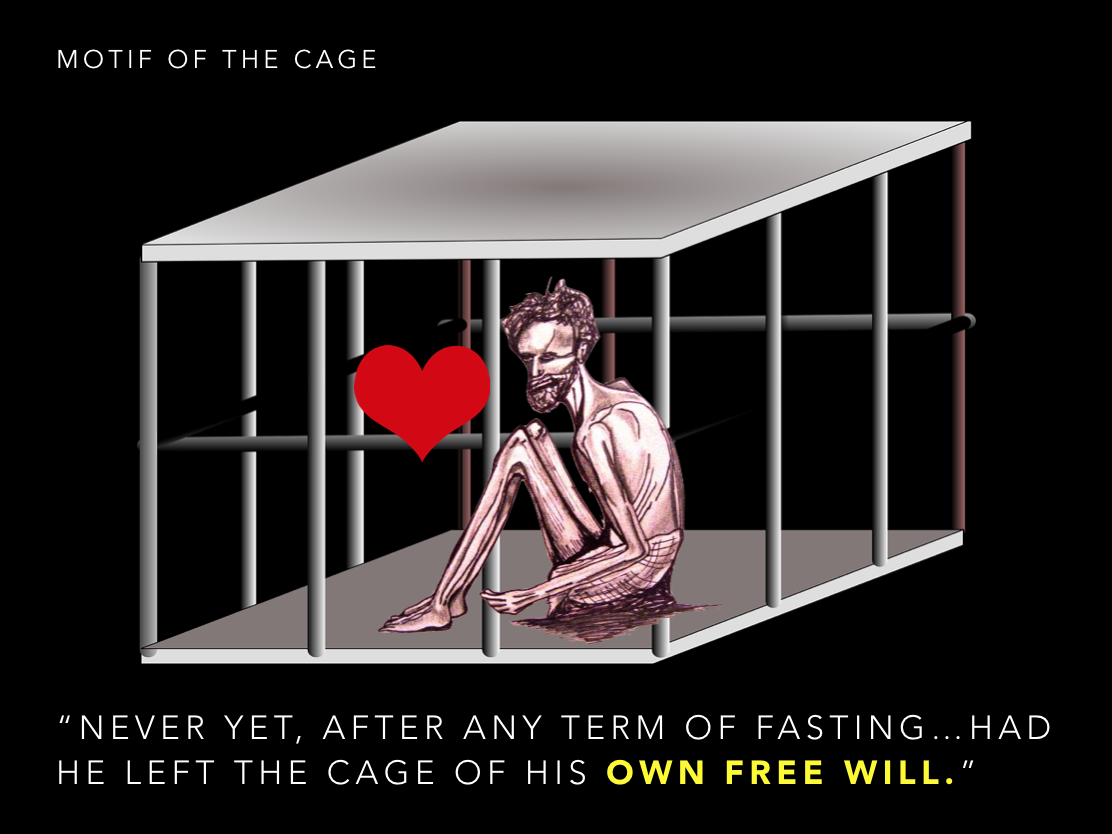 In the story, the spectators of the hunger artist demonstrate immense skepticism and disbelief in the hunger artist's abilities. Initially, the public placed watchers by his cage to patrol and make sure that he was not eating. In response, the hunger artist sang to show that his mouth was empty, to which the crowd decided that he had found a way to eat and sing at the same time. The public also revealed an overall lack of understanding of his art. Spectators were easily manipulated by the hunger artist's impresario (manager) who convinced the public that the hunger artist could not fast beyond 40 days at a time. This resulted in a lack of appreciation for the artist's craft and full range of ability. Finally, the spectators' attitude escalated towards indifference. Eventually, they would walk straight past the hunger artist into the carnival menagerie that he was positioned by. This ironic complete disregard for the artist, who tried so hard to connect with this audience, was the nail in the coffin. His dissent into obsolescence was catalyzed by the fickleness of his spectators. 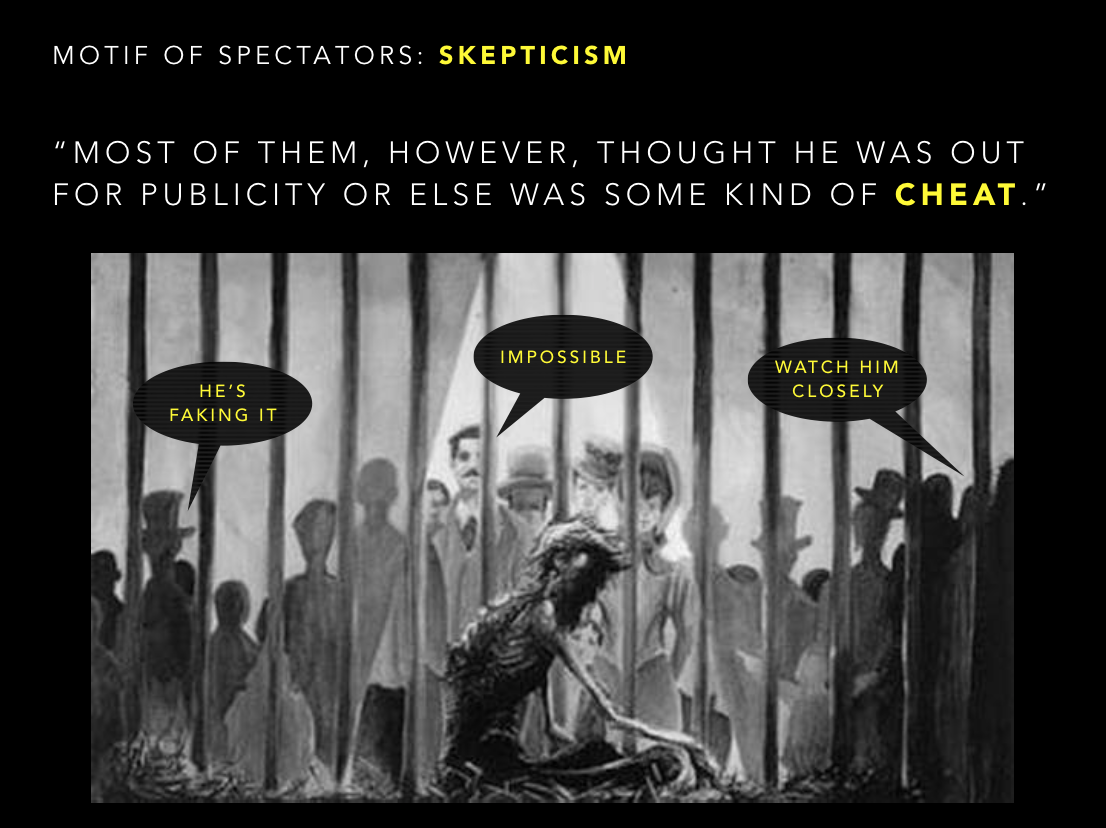 One theme prevalent within "A Hunger Artist" is that isolation can, in part, be self inflicted. This extends from the cage motif; even when the artist's cage was opened, he clung to this literal and figurative barrier between himself and his onlookers. In fact, he actively chose to put his cage near the animals in a carnival, showing that on some subconscious level, he may equate himself as so deviated from society that he does not belong in the realm of humanness, rather among animals. His physical isolation was a result of his own decisions, showing the necessity for artists to intentionally retract themselves in order to seek perfection in their work. This also sheds light on an important paradox: the hunger artist purposefully isolates himself, but builds his craft off the need to draw others in.

Another theme prevalent in "A Hunger Artist" is that pride, in excess, can blind us to the effects of our actions. In the piece, the hunger artist is not allowed to fast beyond 40 days. This is a biblical reference, as Jesus Christ conducted a 40 day fast in according to New Testament texts. Thus, readers may be tempted to view the hunger artist as a sort of martyr. It is essential to note that the hunger artist is said to be a "martyr in another sense..." meaning that he personifies the second definition of a martyr: one who displays suffering for admiration, a bizarre, almost egocentric pattern of behavior. It is clear that the hunger artist shows sign of pride in his form of art, seeking validation in his narcissistic grasps for attention. His obsession with fame propelled him to continue fasting past the 40 days he had reached prior, seeking recognition on a global scale. This pride blinds him to the paradox he has thrust himself into. He craves validation and attention from spectators for his art, yet it is his art that repulses, confuses, and drives his spectators away. His body, the physical embodiment of his art, is the very thing that repulses onlookers and drives them to indifference. Pride perpetuates this vicious cycle of ignorance.

On an allegorical level, the entirety of "A Hunger Artist" can be seen as a rejection of faith and our modern world's preference for the physical realm. The hunger artist is a character who rebukes the natural human impulses for food, indicating his rejection of tangible needs and embodiment of a spiritual presence. The humans around him are first enamored yb this concept, yet throughout the piece they are skeptical of his ability to resist human impulses. The end of the piece is essential to this theme. After clearing away the hunger artist's body from his cage, they fill it with a panther who is "refreshing", eating all it pleases. The people "did not ever want to move away" from the creature who actively indulged itself in the physical world, demonstrating the human affinity and preference for the physical and rejection of the spiritual realm. 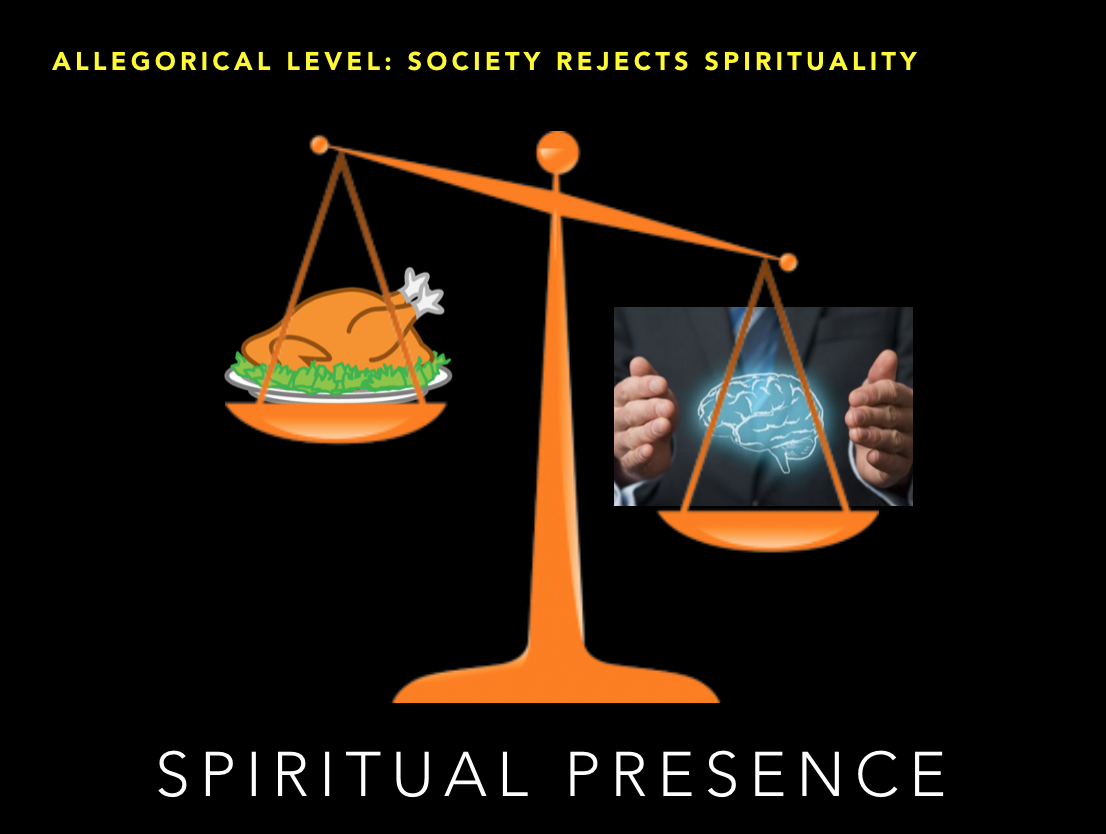