The rise of literary modernism in the late nineteenth century marked a stylistic revolution, where authors departed from the extravagant, grandiose Victorian era works and sought to tackle the irrational, existential elements of their surroundings. During this period, Franz Kafka wrote his short stories and novels in an absurdist, bizarre fashion, while maintaining a strangely nonchalant tone throughout many of his pieces. This style of writing is so distinct that scholars have created the adjective "Kafkaesque" to describe anything reminiscent of Kafka's unorthodox works. The Metamorphosis is the epitome of the "Kafkaesque" style, as its fantastical elements are described with Kafka's signature sardonic attitude.

"Kafkaesque" Style in The Metamorphosis

In his popular tale The Metamorphosis, Kafka incorporates radical, absurdist details coupled with vivid imagery and peculiarly stark language and diction. The amalgamation of these stylistic elements is the epitome of what is now popularly known as “Kafkaesque:” all things pertaining to the bizarre, cynical, unjust realm of Kafka’s works.

The imagery within The Metamorphosis contributes heavily to the horrific nature of the short story. After noting Gregor Samsa's initial awakening as a cockroach, Kafka extensively describes Gregor's inability to leave his bed, remarking on his scrambling insect legs. The implication of Gregor's struggle is clear as readers of the story become cognizant of Gregor's transformation through visualizing his insect form. Yet, it is the lack of detail provided prior to this visual imagery that is most jarring. Kafka neglects to explain how the process of Gregor's transformation took place, or more importantly, why Gregor had fallen victim to such a grotesque change. This, ultimately, causes readers a sense of disorientation and confusion. With an illustration ofGregor's struggle as a cockroach with no explanation, Kafka establishes the imaginative, yet ominous context for which he is so well known. 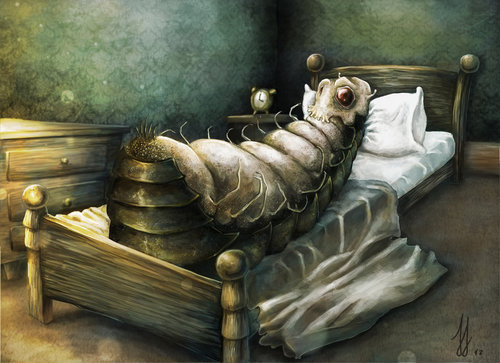 Towards the middle of The Metamorphosis, Gregor begins to display a fervent desire to keep a picture of a woman in his room. In his desperation, he clings to the picture, expressing immense fortitude in his decision to keep the painting. His determination to protect the piece signifies a similar desire to cling to any form of prior humanness, and subsequently combat complete isolation. Through this seemingly minute detail, Kafka is able to evoke a sense of desperation in the character, coinciding with the bizarre nature of Gregor's current state.

Another detail which contributes to the unsettling aura of the short story is Gregor's family's reaction to his death. Kafka mentions that immediately after finding Gregor's corpse, the family boards a tram, and his parents notice that his sister Grete looks particularly beautiful. This is how the story concludes; on the prospect of a marriage for Grete and the possibility of good fortune. Yet, nothing is mentioned about Gregor's demise; the family appears nothing but indifferent towards the death of their breadwinner and son. Subsequently, Kafka saturates the ending of this piece in cynicism, using the detail of the family's tram ride as an indicator of man's inexplicable self-interest, and the impossibility of the isolated to be noticed within society. On the same thread, the lack of detailing regarding the death of Gregor contributes to Kafka's chilling ending, leaving readers perplexed at the an eerie void of emotion or visceral reaction to his death.

Surprisingly, Franz Kafka juxtaposes the overwhelming content of his story with a stark use of matter-of-fact language, employing a more simplistic and efficient means of expression. This concision of language is established even within the first sentence, as Kafka opens the tale by merely stating that Gregor Samsa has woken up transformed into a "gigantic insect." The nonchalant tone of this phrase directly contradicts the magnitude of its claim, thus precipitating a contrast between language and event. The attitude is one of mysterious indifference to the point of dispassion, which generates the famous "Kafkaesque" absurdity from the outset of the story.

Kafka maintains this stark use of language with explanatory expressions filled with direct claims. Instead of lengthy adjectives and ornamental embellishments within his sentences, Kafka floods the pages of his story with irony, as seen when Gregor — despite being indefinitely trapped in his room — looks forward to conversing with his family on Christmas day. His isolation is augmented in the eyes of readers, and the stylistic device of concise language riddled with intense irony punctuates the sardonic cynicism of The Metamorphosis.

Kafka's diction throughout the story remains, for the most part, functional and mechanical, causing Gregor's impossible transformation to appear paradoxically feasible. Yet, later in the story, Kafka makes decisive choices of diction observed by subtle nuances in his word choice, which evoke dark connotations and indicate catastrophic ramifications for Gregor. Grete's referal to Gregor as an "it" by the end of the piece is a verbal declaration of her complete abandonment of Gregor, solidifying his loneliness and catalyzing his eventual ossification. When Kafka later notes in the same scene that Grete wipes her tears in a mechanical fashion, his word choice implies a numbness and lack of empathy for Gregor, her familial love for him rendered obsolete. These subtle stylistic choices regarding Grete signify the divide etched between Gregor and his family, revealing Kafka's expertise in layering his stories with hopelessness through the medium of concise and melancholy diction.

Regarding syntax, The Metamorphosis is relatively straightforward as the piece lacks loose or periodic sentences throughout. It is also void of parallelism and repetition, thus emphasizing Kafka's obscurity and aversion to consistency within the contents of his story. The rhetorical questions in the story also convolute readers' minds, as they experience the same feelings of distortion that Gregor does. Amidst this relatively simplistic syntax, one must also note the long length of many sentences, punctuated with the occasional exclamation point. The drawn out sentences seem to parallel the listless nature of Gregor's seclusion, and the exclamation points embody the "terror" felt by Gregor's family. With this in mind, Kafka's syntax mirrors his structurally simplistic yet ideologically complex style of writing, and overall, heightens the readers' interaction with the text.