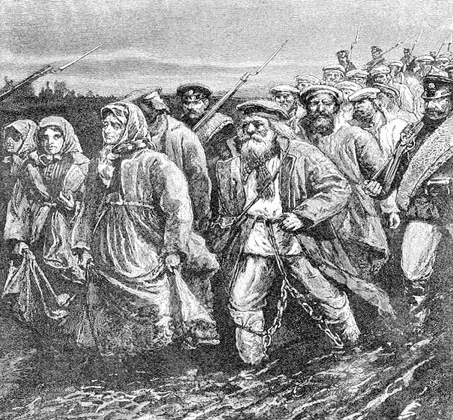 Russian prisoners marching off to exile 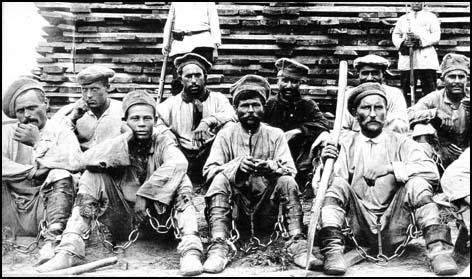 Prisoners in chains in Siberia

“Nekhlyudov sat down by the window, looking out into the garden and listening. A fresh spring breeze wafted the scent of freshly dug earth in through the little paneled window, gently lifting the hair on his perspiring forehead and stirring the papers on the window-sill, which bore the scars of knife-marks. From the river came the regular slapping of the women’s washing-paddles; the sounds merged together and floated across the glittering sunlit surface of the pond, along with the steady splashing of water on the mill-wheel. A zooming, startled fly buzzed past his ear.” (Tolstoy 238) 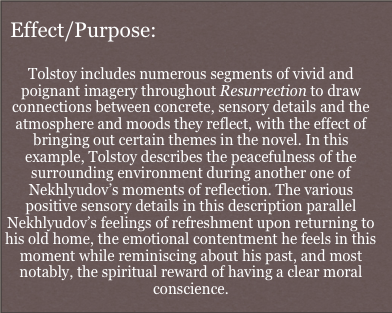 “[The prisoners] moved along in serried ranks, horribly alien creatures dressed the same and shod the same, thousands of feet marching in step, and swinging their arms to keep their spirits up. There were so many of them, they all looked so exactly similar, and their circumstances were so abnormal Nekhlyudov no longer saw them as men; they seemed like weird and ghastly creatures from another world.” (Tolstoy 377) 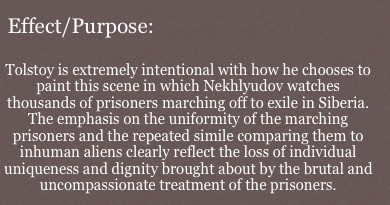 “The doorways into the cells, and the corridors, were aloud with snoring, moaning and people muttering in their sleep. Human bodies lay around heaped up everywhere, wrapped in prison cloaks...The smoking lamp seemed to be casting its dim glow through a mist, and the air was hard to breathe...Three people who had obviously failed to find any space even in the corridor had settled down in the entry cheek by jowl with the stinking parasha (toilet), which leaked at every seam.” (Tolstoy 469) 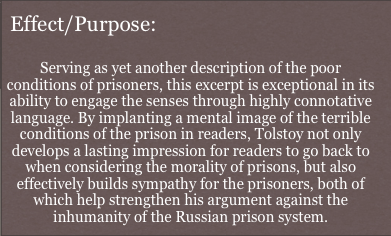 “Everybody knows which institutions - the plants and factories, workshops, bar-rooms, pubs, and brothels. Not only are we not eliminating such institutions, we regard them as essential, we encourage them, we regulate them.” (Tolstoy 141) 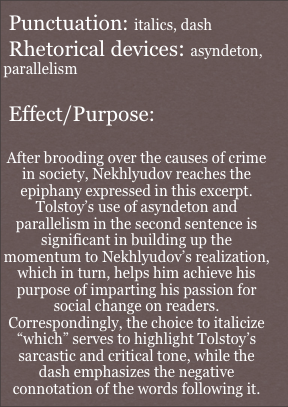 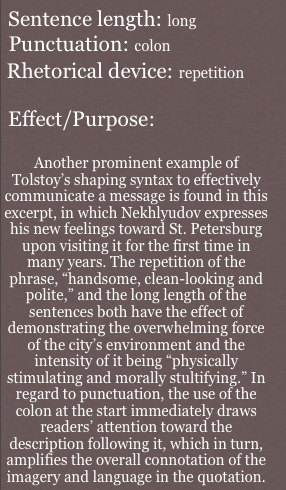