Besides his terse style and the iceberg theory, Ernest Hemingway was known for writing from his own experiences, which made some ideas or symbols to repeatedly appear in all his works. He served in the military for most of his life and enjoyed drinking and reflected these characteristics onto his characters. Therefore, common themes in his works include heroic fatalism and disillusionment after warfare, and common motifs include excessive drinking and ideal masculinity.

I had seen nothing sacred, and the things that were glorious had no glory and the sacrifices were like the stockyards at Chicago if nothing was done with the meat except to bury it. There were many words that you could not stand to hear and finally only the names of places had dignity. Certain numbers were the same way and certain dates and these with the names of the places were all you could say and have them mean anything. Abstract words such as glory, honor, courage, or hallow were obscene beside the concrete names of villages, the numbers of roads, the names of rivers, the numbers of regiments and the dates.

A true hero faces death with dignity. Efforts to avoid death are ultimately futile and this nihilism is not a product of surrender but of heroic courage. Heroic fatalism refers to being able to recognize impending death and to live life with dignity until demise.

This theme is most evident in his novella, Old Man and the Sea. Santiago, the protagonist of the story, sails further and further out to catch the biggest fish. He manages to catch a marlin after eighty-seven days from his last fishery after three days of battle, and even as he is returning home, he continues to fight off sharks from eating his prey though he knows that his battle is useless. This story is an epic about a man who refuses to dogmatically succumb to death and give up his meaning in life. During this journey, Santiago falls sick, gets injured, gets a sunburn, and is barely able to rest, but never gives up. He says,

“… man is not made for defeat … a man can be destroyed but not defeated."

... Thus revealing heroic fatalism. Indeed, Santiago’s soul as a true hero is not defeated by nature though his physical body is destroyed. Though he returns with only a fraction of the marlin, the townspeople, and the readers know that he is a true hero with dignity. Hemingway perceived struggles in life much alike with battles during wartime and, from his experiences, saw that man should die while fighting for his glory.

Disillusionment after World War I 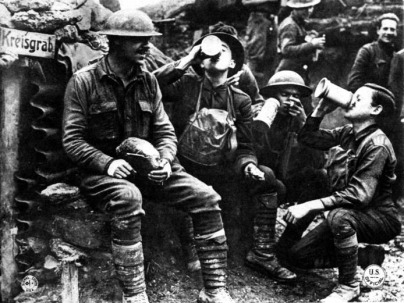 Many Americans were disillusioned by the huge number of casualty brought by World War I. Hemingway himself was disillusioned by the horrors of the war that he experienced and expressed this idea in his works. This disillusionment also brought about the Lost Generation, which Hemingway and many of his characters were representative of. People of the Lost Generation who has witnessed WWI were morally and ethically drained and saw no significance in what used to give meanings in life.

He cries vanity of war in a number of his works, and most notably in his novel A Farewell to Arms. Frederic Henry, the protagonist of the novel, leaves the destruction caused by the war behind, and many characters in the book disdain the deaths and violence war bring and question its supposed glory as well. During the Italian retreat, morals and spirits of the soldiers in the war front crumbles, in which Hemingway conveys the idea that times of violence and chaos robs even the innocent people of ethical judgments. However, Hemingway does not write from a pacifist point of view; rather, in his works, he portrays wars as something terrible but also inevitable. The world is senseless and cruel, and wars are merely outcomes of the coldness of the world. The world is reflected in the war in the clearest way, and it refuses to preserve true love.

During the wartime, Frederic Henry laments,

“Abstract words such as glory, honor, courage, or hallow were obscene beside the concrete names of villages.”

Hemingway writes war is not an embodiment of glory, honor, courage, hallow or any other abstraction, but merely the world itself.